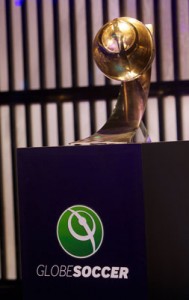 Great excitement at the foot of the giant tower for the Globe Soccer Awards now in their third edition. Downtown Dubai is an unmissable event for football, legends have passed through here, such as Cristiano Ronaldo and Del Piero, Rosell’s Barcelona and directors such as Galliani, Gil, Pinto Da Costa have been crowned here, without forgetting the master among agents, Jorge Mendes who works for Mourinho and numerous footballing stars.  Burj Khalifa, standing 828 metres tall spread out over 160 floors, has been a constant witness to an event which has grown together with the tower of the skies, a New Year icon that appears on news reports worldwide.

There are ten awards in this third edition, after three in the first year (the award winners were Galliani of AC Milan, Gil of Atletico Madrid, and Jorge Mendes as agent of the year) and six in the second (which went to Barcelona, Cristiano Ronaldo, Del Piero, Pinto Da Costa, Mendes again and Ronaldo a second time for the special media award).

This time the various categories include outstanding candidates, such as the footballer of the century, due to the presence of Diego Armando Maradona, or the special award for the UEFA President Michel Platini, a guiding light for the whole sport which, in him, can call on an outstanding executive who made his name as a star on the pitch. The other changes compared to 2011 concern the Award for the highest goal scorer in the United Arab Emirates, as a national product, and the career award for agents, in keeping with the award which is already envisaged for players. 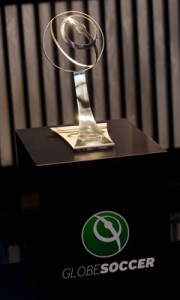 It is right to recall the list of candidates which the ECA and the EFAA put to the award jury. For the best team, the list included Chelsea the champions of Europe, Atletico Madrid the winner of two European trophies including the Super Cup against the English champions, Juventus as the only unbeaten team in the 2011-2012 championships, and Bate Borisov for its ability to compete in the Champions League every year despite starting from a tiny income base. Among agents the three names selected were Jorge Mendes, Vagner Ribeiro and Kostas Liolios, with the Portuguese agent favourite to complete a hat-trick thanks to the successes of his clients. Alongside Mendes are two of his greatest talents, Josè Mourinho and Radamel Falcao.

The setting could not be better. Khalifa which dominates the scene, lights and music for the stars in the sky. Platini and  Maradona, Rosell and Gil, Mourinho with Capello, Zaccheroni, Zenga, Radamel Falcao and Eric Abidal, Mendes and Jansen,  it’s enough to make your head turn and all with Piero Chiambretti, Dubai TV, Sky TV and MBC at work between one award and another.

Here are the 10 award winners

The Awards have reached the third edition, with the participation of managers, champions, agents and great teams, in other terms of all the worldwide football protagonists.

The EFAA, the FIFA agents association, and the ECA, the UEFA clubs association, have cooperated once again in the definition of the candidates’ list to this edition’s awards, for what it concerns the ones reserved to the agents and the teams.

We’ll have with us the UEFA’s agent of the year, Jorge Mendes ,who has already won 2 Globe Soccer Awards, again selected by the EFAA along with Vagner Ribeiro (twice nominated) and Kostas Liolios to run for the Best Agent of the year Award. They are the top agents of the moment, those who take care of people like Mourinho, Cristiano Ronaldo, Radamel Falcao and Niemar. Last year, Rajola, the agent of Ibra and Balotelli, has been on the running until the end.

The ECA, for the second time, suggested the list of the teams of the year, which materialized in four names: Chelsea, as European champion, Atletico de Madrid as Europe League and European Super Cup winner, Juventus, the only unbeaten team, speaking of national championships, Bate Borisov, representing the real balance miracle between economic chances and results on the field.

BEST CLUB OF THE YEAR

Unbeaten winner of the 2011 championship in Italy, the only championship-winning team that managed not to lose a match in the year.

Winner of the European Champions League, after years of trying, in its most difficult season and thanks to the leadership of a former player who was moved up to fill the position after an unexpected mid-season managerial crisis.

A candidate thanks to its ability to achieve international sporting success well above what the club’s turnover should allow, a fact confirmed by its recently consecutive qualifications to the group stage of the European Champions League.

Winner of the Europa League and of the European Super Cup, two years after first achieving the same feat. It represents the confirmation that sound management and being competitive on the pitch can coexist, by sacrificing great talent, see the case of Aguero who was sold in 2011, and unearthing new talent, such as Radamel Falcao, a very successful player and a probable key figure on the transfer market in 2013.

BEST AGENT OF THE YEAR

He confirmed his position as the key player in the most important transfers in 2012 too, thanks, among other things, to Witzel’s move from Benfica to Zenit. Through his company, Gestifute, he manages over 70 players, including stars such as Cristiano Ronaldo and Radamel Falcao. It is the number one agency in the world on the basis of the turnover generated by its clients

The agent for the stars of tomorrow, with Lucas and Neymar leading the way, he made his mark on the market in 2012 thanks to the sensational transfer of Lucas Moura from San Paolo to Paris Saint-Germain.

An up and coming agent who is establishing a reputation for identifying new talent and helping them settle in at their clubs, especially on the German market.

10 Awards are waiting  for us, here the categories