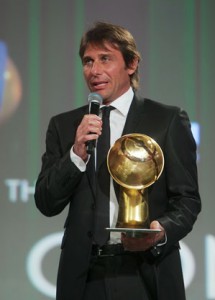 Dubai – The fifth edition of Globe Soccer ended with the first international award to Antonio Conte, the Juventus coach, who was judged the worthy winner of the award for the best coach of 2013. An important recognition which was given not only for the championships won and for the continuity displayed, but for the quality of play and character which his team has always demonstrated. Antonio Conte’s award is a passport towards future development and success, confirmed by the association with Guardiola, another coach who has barely turned 40, and who is already a record holder in terms of trophies won and, as such, another award winner.

This new footballing generation, which was joined at the event by the grandmaster Fabio Capello, promises to dominate for some time and has the advantage of being at the head of two historic clubs, Bayern Munich and Juventus, which are used to accumulating titles and guaranteeing the due prestige and authority to whoever leads them.

The now traditional year end in the Gulf also offered another confirmation in the case of Franck Ribéry, winner of the Globe Soccer Award 2013 for having won five trophies over the course of 16 months and having made an outstanding individual contribution. The French star of Bayern Munich has won the German Championship and Cup, the Champions League, the European Super Cup and the World Club Championship, a complete sweep, together with the rest of his teammates, but he deserves credit for having provided the winning solution in almost all the club’s successes. For Franck, who during his stay in Dubai spent time with the kids being treated at the Rashid Paediatric Centre here in Dubai amidst scenes of great enthusiasm and laughter, this was the confirmation of having reached the pinnacle of the game.

Cristiano Ronaldo, another leading figure at the fifth edition of Globe Soccer, won the “Fans Best World Player Award”, which was voted for by thousands of fans online who chose the Portuguese star as the best player.

There was also an Award for Xavi, which was given on the basis of his stats as the best player of all time in terms of assists as well as being European and World champion with Spain, and a career award for the Brazilian-Portuguese player Deco, who recently retired after twice winning the Champions League with Porto and Barcelona.

The Award for best team of the year, the shortlist for which included Juventus as winners of the last two Italian championships, could only go to Bayern Munich and was once again collected by Franck Ribéry, a symbol of the most important season in the renewal of German football.

For Italy another outstanding individual story turned into a career award, this time for Giovanni Branchini who masterminded Pep Guardiola’s transfer to Bayern Munich.  Branchini’s work is driven by passion and skill and he is widely admired, including by the stars of the game, because he regards their problems as his own. The Guardiola transfer is truly amazing because he managed to convince two clubs which have dominated football in recent years and which have millions of fans. The award is for the coaching transfer of the year, but also crowns the work he has been doing for well over a quarter of a century. Branchini brought Ronaldo Nazario de Lima to Europe, taking him from Holland to Spain and then to Inter Milan, and now he negotiates for a Spaniard with the Germans. The real star in this case is the outstanding agent and he wins an Award whose worth goes well beyond all other considerations.

Audi Football Night in Dubai offers one more record holder and it is Jorge Mendes, agent to the stars, winning his fourth consecutive Award as best agent of the year and who managed to take Mourinho from Real Madrid to Chelsea, after setting Monaco on their way with Falcao. He now has four Globe Soccer awards and can challenge Messi to see who can be the first to win 5 of the footballing Oscars.

The coach of the United Arab Emirates’ team which won the Gulf, Mahdi Ali, was playing “at home” and won the award for best coach in the Gulf.

The Awards are now in their fourth edition, with the participation of managers, top players, agents and leading clubs, in short, all the main figures in world football.

The EFAA, the association of players’ agents, and the ECA, the European club association, have once again contributed to drawing up the list of candidates for this edition of the awards, specifically for the awards for agents and clubs.

The names of the Award candidates have been published and are the result of the work undertaken and the choice made by the ECA and the EFAA.

Chelsea FC
(England), winners of the Europa League, their second consecutive European trophy (after the Champions League in 2012).

FC Basel
(Switzerland), the Swiss champions for four years running and semi-finalist in the Europa League.

FC Bayern Munich
(Germany), for the triple (domestic league and cup and the Champions League), as well as winning the European Super Cup for 2013.

Juventus FC
(Italy) for the two championships won, one of which without losing a game, and for the quarter finals of the Champions League which they reached in 2013.

Malaga
(Spain), for reaching the quarter finals of the Champions League on their first appearance.

Giovanni Branchini (Italy)
For his work on the coaching transfer of the year, with the arrival of Guardiola at Bayern Munich, the European champions.

Jorge Mendes (Portugal)
For having revolutionised the coaching situation in the English Premier League, the Spanish Liga and the French Ligue, with Mourinho’s move from Real Madrid to Chelsea and Falcao’s from Athletic Madrid to Monaco.

Jonathan Barnett (England)
One of the two partners in the company which handled Bale’s record transfer from Tottenham to Real Madrid.

Here are all the categories for the Globe Soccer Awards

The winners of the Globe Soccer Awards were announced during the official ceremony, which took place on the 29th of December in Dubai
Years
see you in Dubai