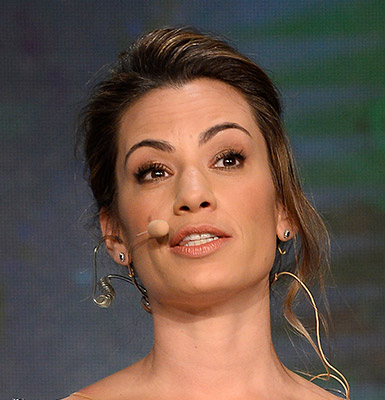 Anne-Laure Bonnet is an established broadcast journalist and one of France’s leading sports presenters. Her first major experience was to cover the FIFA world cup in 2006 in Germany for French channel M6. After a successful period presenting the Formula 1 World Championship for TF1 in 2008. She has been poached by the Italian giant Sky Italia becoming an expert in Italian & European football. In 2013, beIN sports France officials managed to bring her back home. Since then Anne-Laure has been travelling across the world earning a breadth of experience. Having covered the EURO 2016, the 2015 Copa America in Chile, the 2014 FIFA World cup in Brazil and all UEFA Champions League seasons- since 2010. Fluent in French, English, Italian, Spanish and Portuguese with a solid background in German and Russian. She is the most prominent multilingual TV presenters worldwide. She showed it by conducting various memorable interviews with some sports legends such as Michael Schumacher, Rafael Nadal, Cristiano Ronaldo, Leo Messi and the Brazilian El Fenomeno Ronaldo.