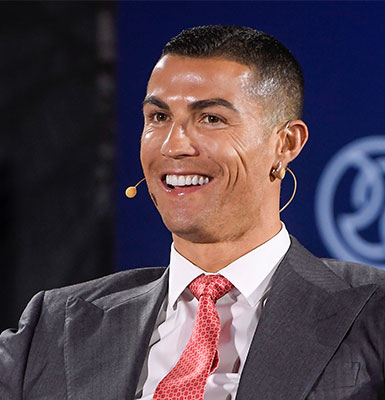 First European to break the 100 international goals mark, Cristiano Ronaldo is the most accomplished Portuguese professional footballer in history who has made an exceptional impact for top clubs such as Manchester United, Real Madrid and Juventus FC.

Awarded the Globe Soccer Best Player of the Year for six times, he is widely regarded as one of the greatest players of all time. Cristiano has won 30 major trophies in his career, including seven league titles, five UEFA Champions Leagues, one UEFA European Championship, and one UEFA Nations League title. He also holds the records for the most goals and assists in the history of the UEFA Champions League. He is one of the few recorded players to have made over 1000 professional career appearances and has scored over 750 senior career goals for club and country.

During his incredible career, Cristiano Ronaldo has undoubtedly become one of the most iconic sport figures worldwide.