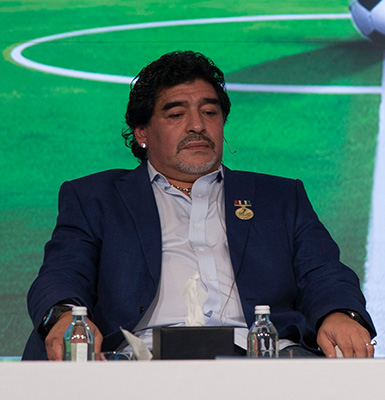 Argentine football coach and former footballer
Diego Armando Maradona, born 30 October 1960 is an Argentine football coach as well as a manager and former player. Many experts, football critics, former players, current players and football fans in general consider Maradona to be the greatest football player of all time. He was joint FIFA Player of the 20th Century with Pelé.   He is the only footballer to set world-record contract fees twice, firstly when transferring to Barcelona for a then world record £5m, and secondly, when transferred to Napoli for another record fee £6.9m. During his professional club career Maradona played for Argentinos Juniors, Boca Juniors, Barcelona, Napoli, Sevilla and Newell's Old Boys. At club level, he is most famous for his career in Napoli where he won numerous accolades. In his international career, playing for Argentina, he earned 91 caps and scored 34 goals.
Years
see you in Dubai