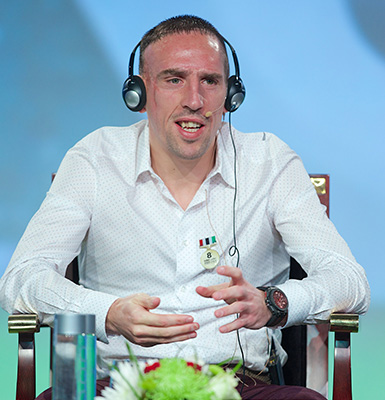 Bayern Munich Football Player
Franck Ribéry is a French international footballer who plays for German club Bayern Munich in the Bundesliga and for the French national team. Ribéry's career began in 1989 as a youth player for local hometown club Conti Boulogne. After that he played for Lille, US Boulogne, Alès and Brest. In 2004, Ribéry started playing in Ligue 1 with FC Metz. After six months with the club, he moved to Galatasaray, where he won the Turkish Cup, and a few months later joined Marseille. In 2007, Ribéry finally got to Bayern Munich where he won the double on two occasions; in the 2007–08 and 2009–10 seasons. In 2013, the French player won the Champions League and the Treble, with Bayern Munich in a "German" final against rivals Borussia Dortmund. In 2013, Ribéry was ranked as the third-best footballer in Europe by Bloomberg and won the UEFA Best Player in Europe Award.
Years
see you in Dubai