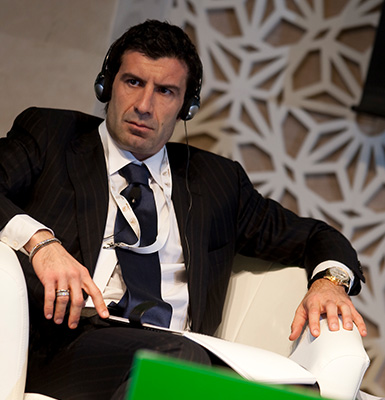 Luís Filipe Madeira Caeiro Figo (born 4 November1972 in Almada) is a former Portuguese footballer who played as a midfielder for Sporting Clube de Portugal, FC Barcelona, Real Madrid, and Internazionale during a career which spans over 20 years. He retired from football on 31 May 2009. He won 127 caps for the Portuguese national football team. Figo was the 2000 European Footballer of the Year, the 2001 FIFA World Player of the Year, and was named amongst the FIFA 100. Figo is one of the few footballers to have played for both the Spanish rival clubs FC Barcelona and Real Madrid, he had a successful career highlighted by several trophy wins, such as one Portuguese Cup, four La Liga titles, two Spanish Cups, three Spanish Super Cups, one UEFA Champions League title, one UEFA Cup Winners' Cup, two UEFA Super Cups, one UEFA-CONMEBOL Intercontinental Cup, four Serie A titles, one TIM Italian Cup and three Italian Super Cups.
Years
see you in Dubai