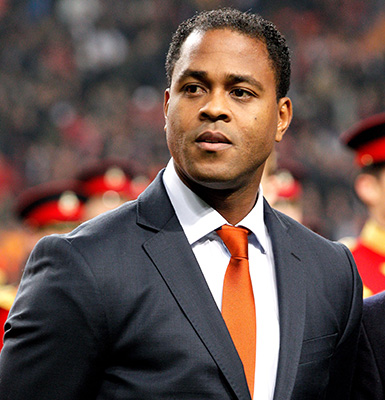 Dutch of Surinamese origin, an incredible footballing talent, and mentioned in the same breath as legends such as Van Basten and Cruyff. Brought up in footballing terms in the youth sector at Ajax, he joined the first team aged 18 and scored 18 goals (1993/94). The next season, still aged under 20 and still at Ajax, he won the Dutch championship and Super Cup and, above all, his first Champions League. That was the final Ajax played in Vienna against Fabio Capello’s AC Milan on 18 May 1995 which saw Ajax win the day thanks to a goal by Kluivert in the final minutes of the game. For the record Patrick was then the youngest goal-scorer in the history of Champions League finals. There followed an extraordinary career alongside Van Basten and Gullit as part of the fantastic trio at Berlusconi’s AC Milan (more trophies and Champions League victories followed), before moving on to Barcelona (and then Newcastle, Valencia, PSV and Lille). Now Kluivert is a coach and in 2014 was an assistant to the Dutch team coach in Brazil.