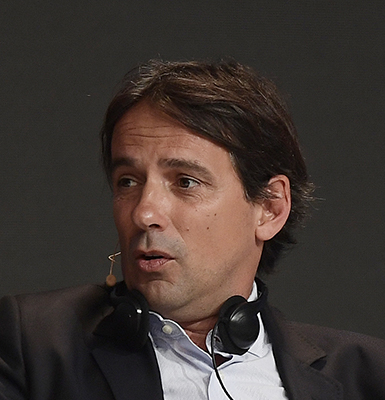 Born in Piacenza, Inzaghi started playing professionally in 1993 with hometown club Piacenza. Later in his career, he was signed by Lazio and had a productive first year by scoring seven times in the league and nine in 11 UEFA Champions League games.

In his Playing career, Inzaghi won the Serie A in 1999-2000 season, Copa Italia 3 times, Supercoppa Italiana twice, and the UEFA Super Cup in 1999.

Inzaghi retired as a club and national player in 2010, but remained with Lazio, coaching their Primavera sides. In 2016 he was appointed at the Senior team on an interim basis. The following season he was named as the permanent Manager. He guided the team to fifth place in the domestic league as well as the final of the Italian Cup in his first season.

He won the Supercoppa Italiana in 2017, and the Coppa Italia in 2018-19 Season as a manager. Given his outstanding results as a manager so early in his career, Simone is rightfully being considered as Italy’s most talented young coach.