An advert for football from Globe Soccer and Dubai. Platini, Maradona and Mourinho join the party. 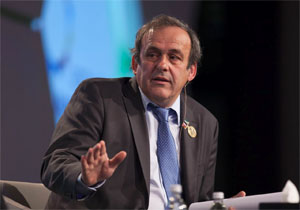 The fourth edition of Globe Soccer took place as part of the 7th edition of the Dubai International Sports Conference in the presence of leading stars from the game, both during the works of the event and during the more informal setting of the awards ceremony. The opening session was electrified by the words of UEFA President, Michel Platini, who stated his willingness, should he succeed Blatter, to become the defender of traditional values, even though he is an innovator. Platini intends to take up the fight against the creators of financial products that speculate on the ownership of the registration rights of leading players. Talent for hire with the sole purpose of draining wealth from football must be brought to an end. Everything else is possible, from the World Cup in the winter in 2022, to the idea of Qatar voluntarily opening up to different solutions, even involving other countries in the Gulf.The awards ceremony, ranging from the emotions of Falcao and Abidal, with their respective presidents, to the joy of the three-time winner Mendes, was marked by the acknowledgments for the greats of the modern era and of the game’s history. Maradona, Platini, and Mourinho took turns at being the focus of attention and generated a new level of enthusiasm in a game that is being put to the test by the current crisis. The miracle achieved by football is that of being history, tradition and culture, ingredients which make meetings such as this a real chance to spread the word. Dubai and its fantastic, passionate representatives from the Emirates toasted this outstanding presentation of what football has been and what it will soon become.The second day highlighted three different situations regarding the theme of ethical behaviour which is the focus of the local Ministry of Sport, the Dubai Sports Council.  Italian coaches, who are in high demand worldwide, profiled their ideal mix in the changing-room, FIFA set out the latest idea on “transparent” transfers, and Falcao and Abidal played the role of professional stars, as if setting out a standard for them.  Capello, Zaccheroni and Zenga were feted as representatives of a method which is proving successful worldwide, also thanks to Ancelotti, Mancini, Spalletti, Lippi and many others.  Globe Soccer revealed FIFA’s willingness to insist on transparency in individual transfers. Mark Goddard, the director of TMS (the system which regulates each transfer), explained the GPX, another acronym designed to expand the field of services (not a law, but a form of support to offer a modern database built on information from 5 thousand clubs).Falcao and Abidal revealed what it is like to be a champion. Falcao is the player of the year who is reluctant to become the key piece in the transfer market jigsaw, even if his colleague reassured him: “If you score at Madrid, you’ll also score at Barcelona”. Abidal spoke from the heart, as he fights against his illness and is winning the battle: “I expect only what is God’s will, now I am fine and it is my duty to return to football for my family. Over these last two years the club has shown me what I read on my first day there: Barca is more than a club”The closing session fell to the Italian Serie A League, with the CEO Marco Brunelli seeking out new horizons after showing the value of the Italian Super Cup in China.