Results of the sixth edition

Globe Soccer / The Conference / Results of the sixth edition

Platini at Globe Soccer sets out the path to the future: defending the social value of the sport 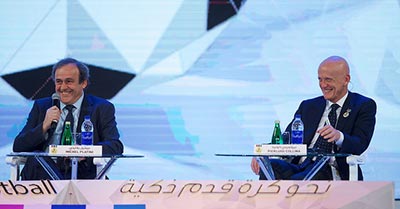 the UEFA President, in opening the works of the event, focussed on this theme almost as if he wanted to express European football’s sense of responsibility towards the growing importance of a sport that he defined as: “the team sport par excellence, played in every country by millions of children”,
“We must feel the sense of responsibility and not forget the history of football, the world’s most popular sport. Our tomorrow is in the investment made in training athletes who are first of all men; we cannot go along with those who only think of the financial aspects, transfers or speculation. On the shirts we wear in UEFA competitions for national teams, we do not have sponsors’ names, just as they do not appear on the flags of the countries that we represent. Maybe we are losing out on a lot of money, but this is what makes it everyone’s sport”.

The Juventus President Andrea Agnelli explained, alongside the Chairman of Nottingham Forest, the Chairman of the Emirates League and the Vice President of Emirates, Butros Butros, that the growth of his club is linked to its sporting success and to the new stadium which has now reached a 93% saturation level. “Italian football needs to make up lost ground, including Juventus despite its excellent sporting results and turnover. We were once the championship for stars and now we were considered a staging point. We cannot compare ourselves with those who have stadia with a much higher capacity. Our championship has stadia built on average 64 years ago and cannot compete with those who have developed modern, comfortable and much larger arenas. Chelsea has double the capacity for ticket sales compared to Juve and in Germany the average income is higher than in Italy, so then the problem is not only the stadia. Of course we must try to turn things round. Roma is about to take an important step forward. On the other hand, despite taking in 1.2 billion euro in TV rights, we are worried when we see uncommitted followers of the game abroad choosing the games with more attractive backdrops than ours. Every detail counts, they are the little touches.”

A sense of expectation and recognition also for Berlusconi’s AC Milan, which on 30 December will play against Real Madrid, recent winners of their tenth top European success. The session dedicated to the most successful club internationally, which has just been joined by Real, was based around the direct testimony of three key elements in the cycle: Capello, Inzaghi and El Shaarawi. The most moving comment came from Fabio: “When you enter the home of Real Madrid, you understand immediately that everyone feels part of the strongest team in the world, even when it does not win. You see, this was Berlusconi’s great merit, that he said right from the start that he wanted to make AC Milan the number one club and to make it similar to Real. When you enter Milanello, even if AC Milan are not in the running for trophies, you understand that everyone considers that they are at the number 1 club. Moreover, if today there is a championship which is called the Champions League, we owe that too to Berlusconi and I was an eye-witness to that. He opposed the risk of a team which had won its own championship being eliminated in the first round. That is why he planned a study of the issue with his legal advisers, then he passed it all on to others, but he paved the way.”

In Dubai they set out the numbers of a movement which Platini defined as “the only universal team sport” and which UEFA, through today’s speech by Secretary General Infantino, has clearly sent into orbit. The Champions League brand and the marketing which has made it successful deserve serious consideration. We are faced with growth that offers us a lesson.

“We film the main games with 35 TV cameras and we have created an excellent model, with elements which are a feature of the stadiums where the games are played, offering an immediate message which reaches all fans. The anthem, the brands, the ceremony, the sponsors are all part of the success, to the extent that next year, here on the stage of this conference, we will be able to reveal a few surprises to you”.

Infantino looks forward to 2015 when the European cups will find some changes in terms of organisation and format, after having already promoted entry to the Champions League for the winner of the Europa League. The key to all of this is in the rights: “Centralisation is the key and will be used also for the National Cup which will start in 2018. Creating an identity, a unique event which feeds the dream and magic of football, a new brand which everyone will like, just as the project is already viewed favourably by players and fans. A championship with promotion and relegation and the return of the big clashes, no longer meaningless friendlies. We will have the same schedule for everyone and a really strong product.”

UEFA is a key player at the International Sports Conference, not only thanks to the last three victories in the World Cup and the presence of Platini and Infantino, but there is also a clear desire to show that Europe has understood that it is a safe and sure leader for everyone. “The 2016 European Championships will almost be a World Cup, with 24 teams, and in 2020 we will use 13 host cities. New sponsors are on the way for the Champions League too and will soon be presented”.

Giovanni Malagò, President of the Italian Olympic Committee, explained to everyone how Italy can become credible. “We now have a Government which believes in sport and the great thing is that it has chosen us to react and create economic and social solutions. Europe is looking to improve its GDP and in Italy sport is worth 1.7% of GDP, but support for our Olympic candidacy can take us to 3% in a reasonable timeframe. Our countdown has started and also involves football, besides the natural bridge which we use to join us to Dubai. In 2015 we will host EXPO in Milan, then the Champions League final at the San Siro and Rome is a candidate to be one of the host cities for the 2020 European Championships. 2017 will tell us whether we have the Games, but we are also candidates to host golf’s Ryder Cup, the third biggest sports event in terms of global marketing, and in 2023 the Rugby World Cup. From Milan 2015 to the Rome Jubilee in 2025, with the hope that we can say that the 2024 Olympics would provide a sense of continuity for a city which, in any case, must equip itself for the impact of millions of pilgrims“

Benatia reveals the difference: “there is an incredibly intense work rate compared to Italy”

Reiner Koch, the Vice President of the German federation spoke of German pride at its success, but also indicated why it occurred: “Everything started from the defeats at the start of the 21st century, when academies were opened to prepare young talent. We are now working on the 2030 World Cup because the youngsters have already been born who will be the world champions in 15 years, with an average age of 25. The defeats helped us get on our way, with 56 academies not directly linked to clubs but to leagues, distributed across 21 regions, with the possibility of every child playing. The result was that from 2008 to 2013 these academies have developed 629 young talents for the Bundesliga. That is why, happy as we are at the fourth World Cup victory, we are committed to getting even better.”

And there is an indirect but heavy blow for Italy: “We want to be a candidate to organise the 2026 or 2030 World Cup and so to modernise our stadia”. And just think that we look at the German stadia as they are now as models for the renovation of our own, while they are putting themselves forward to restructure them.

So in the end Antonio Conte is right when he complains of the need to work harder to be able to compete outside of our national boundaries. We haven’t understood that modern football requires a new type of preparation.