Results of the seventh edition

Globe Soccer / The Conference / Results of the seventh edition

In 2015 the innovation of the Workshops 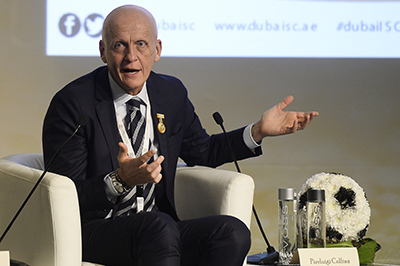 Dubai- The 10th International Sports Conference in Dubai, in the presence of His Excellency Sheik Mohammed Bin Rashid Al Maktoum, the Prime Minister and Vice President of the United Arab Emirates as well as ruler of Dubai, offered a new formula over the two days of the event, accompanied by the Globe Soccer Awards gala.
The key moment reserved for the Opening Ceremony was of extraordinary interest, thanks to the involvement of the President from the world club champions, Josep Maria Bartomeu of Barcelona, alongside two of the 5 candidates for the FIFA presidency, Gianni Infantino and the Prince of Jordan Ali Bin Al Hussein, as well as Umberto Gandini, ECA Vice President.
The innovation came from four other sessions of the event which were transformed into fully fledged workshops for football. Top referees, coaches, directors, and players showed their own active commitment in conversation with all the respective categories from football in the UAE, thus making a significant contribution to growth in the sector.
The key names were Collina, Rizzoli and Irmatov, for the referees; Capello, Antonio Conte and Wilmots, for the coaches; Andrea Pirlo and Frank Lampard, for the players; the General Manager of the Italian Football Federation (FIGC), Michele Uva, for the directors, in the company of Umberto Gandini from AC Milan.
The four workshops ensured the success of this edition, opening the way for further development of the Dubai International Sports Conference.