Results of the eighth edition

Globe Soccer / The Conference / Results of the eighth edition

The Governance of Modern Soccer in 2016

First time for a FIFA President at the Dubai Conference 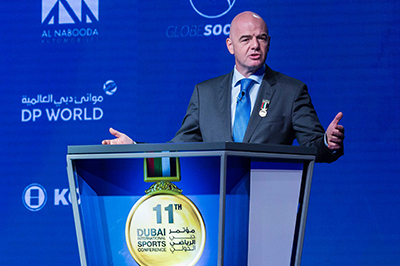 The eleventh Dubai International Sports Conference had, for the first time, a FIFA President leading the works at the most popular football event in the United Arab Emirates. Gianni Infantino, who was elected in February 2016 and was present in 2015 to launch his candidacy programme, wanted to bear first-hand witness to the work done in just a few months by the No. 1 in football, in the presence of His Highness Sheikh Ahmed bin Mohammed bin Rashid Al Maktoum, President of the Olympic Committee of the United Arab Emirates.

The central and concluding moment of the conference held on 28 December was of huge interest, with the confirmation of FIFA’s opening up to players, presentation of the formula for the 48-tea World Cup and the numerous innovations which are being tested, such as the revolutionary introduction of the VAR system. Sharing the stage for the main session, alongside President Infantino, was Victor Montagliani, the CONCACAF President and the FIFA Vice President, who confirmed the candidacy of his own federation to organise the first 48-team World Cup in 2026, probably in a number of countries in Central and North America.

The new format for the conference which was introduced in 2015, with the formula of football- themed workshops, was replicated in 2016 and was highly appreciated over the two days of the works, involving all the main categories from the game (club directors, federal presidents, referees, coaches and players) with an absorbing discussion on the most important current themes.

The key players were Pierluigi Collina, Nicola Rizzoli and Mark Clattenburg, for the referees, with an interesting presentation of the project to test the VAR; Fabio Capello, Fernando Santos and Unai Emery, for the coaches; Mohamed Salah, Samuel Eto’o and Javier Zanetti, for the players; the FIGC President Carlo Tavecchio, with the President of Portugal, the European champions, Fernando Gomes, and the President of the Emirates Federation, H.E. Marwan Ahmad Bin Ghalita, representing the federations; Umberto Gandini of AS Roma and Dariusz Mioduski of Legia Warsaw, for the clubs.

Five sessions of workshops confirmed the success of this formula which saw increased participation by the whole of the United Arab Emirates and sealed the outstanding success of the eleventh International Sports Conference.