The first Italian executive director to receive the Globe Soccer Award for the second time, this time in acknowledgement of his illustrious career, Galliani is being honoured on the same evening as Florentino Perez’ award-winning Real Madrid, with 29 titles to their credit. This is amply justified by the fact that during his 30-year rossonera service he was instrumental in Milan achieving 29 titles. Not surprisingly, the Italian club of the Berlusconi era with such famous victories as the 5 – 0 win over Madrid is second only to the champions of Spain and Europe in the Champions League roll of honour.
Galliani was awarded at the first edition of the Awards for his accomplishments linked exclusively with his history at Milan, and tonight, in recognition of his entire career, he will have the pleasure of being considered equally for the important work he has done for the Italian Serie A Football League, as President and Vice President. Not least among his successes is the recent brilliant promotion of Monza to Serie A, establishing another historical record. In over a century of Italian football as many as 12 teams from the Lombardy region have had the privilege of participating in the top league. 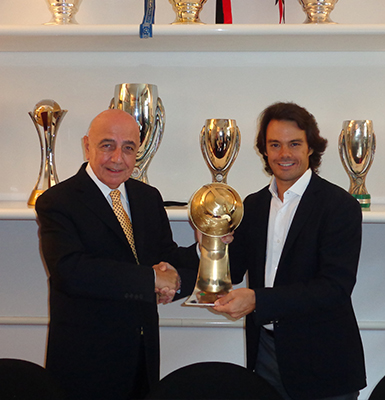