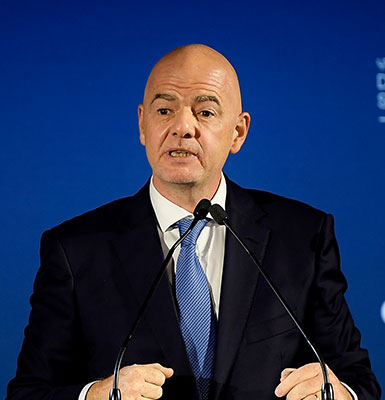 Before being elected FIFA President, Gianni Infantino was the UEFA General Secretary from 2009 to 2016. At the helm of UEFA’s administration, he helped strengthen national team and club football in Europe and create a more democratic and sustainable environment for European football through initiatives such as Financial Fair Play.

Since his election at the Extraordinary FIFA Congress on 26 February 2016, Gianni Infantino has focused his presidency on repositioning FIFA as a credible, trustworthy, modern, professional and accountable organisation.

Working with the FIFA Council, the 211 FIFA member associations and an administration of over 800 employees, he has achieved this through the implementation of a wide-ranging reform process, including the establishment of in-built good governance and compliance functions, and numerous initiatives, chief among which is the Forward Programme – the most ambitious, streamlined and accountable football development programme in FIFA’s history, with FIFA member associations entitled to up to five times the amount of investment they were entitled to in 2015.
Having delivered a successful reform process, the new FIFA has broadened its horizons to take a more active role as a responsible member of global society, whether through the promotion of education and life skills for children under the FIFA Football for Schools Programme, the protection of minors and vulnerable members of the football family with the FIFA Guardians initiative, or by partnering with international organisations – including various agencies of the United Nations, the African Union, ASEAN, and the Council of Europe – to use the unique power of football as a driver of positive social progress.

Gianni Infantino’s long-term vision for FIFA is to make football truly global by levelling-up playing and organisational standards across every continent and expanding participation in the world’s most prestigious football competitions: the FIFA World Cup and the FIFA Women’s World Cup.