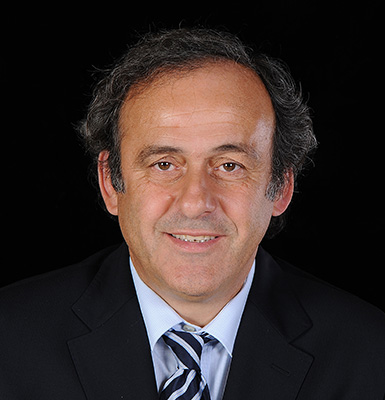 Michel Platini was born in Jœuf, in the Lorraine region of eastern France. He started his football career at AS Saint-Etienne with whom he won the French title. In 1982 he moved to Juventus in Italy where he won several personal and team honours. In 1983, 1984 and 1985 he finished leading goalscorer in Serie A and won the Ballon d’Or as European Footballer of the Year. With the French national team, Platini won 72 caps, 49 as captain, and scored 41 goals. He was France’s coach from 1988 to 1992. From 1992 to 1998 he was Co-President of the FIFA World Cup Organising Committee and vice-president of the French Football Federation from 2000 to 2007. Platini has served as a member of the UEFA Executive Committee and was also the European member on the FIFA Executive Committee (2002-2007). In January 2007, Platini was elected as the sixth President of UEFA and as such he automatically became vice-president on the FIFA Executive Committee. On 22 March 2011, he was re-elected for another four-year term at the UEFA Congress in Paris.

Michel Platini has introduce the concept of FFP for the european clubs.